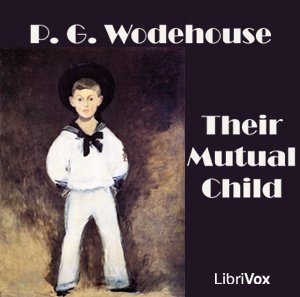 LibriVox recording of Their Mutual Child by P.G. Wodehouse. Read by Tim Bulkeley. Their Mutual Child (aka The Coming of Bill and The White Hope) is full of the loveable characters, preposterous situations, and opportunities to chuckle, if not outright laughs, that we expect from PG Wodehouse. It lacks the frantic slapstick of some Wodehouse comedy, but has a quieter more reflective humour.

Kirk, the erstwhile hero, is a typical Wodehousian hero. At the beginning of the story, he is thoroughly likeable, a healthy, but a somewhat weak and malleable fellow. He dabs at beings a painter for a living, and runs with a gang of hangers-on, who sponge off him. However, his life changes dramatically when he meets the charming and lovely Ruth. Ruth is out of Kirk's league socially and financially. She possesses an exceedingly rich father and an excessively dominant and eccentric aunt, Miss Laura Delane Porter. Miss Porter’s claim to fame is her authorship of books and pamphlets aimed at bettering the world through hygiene and eugenics (the highly questionable “science” of race improvement by restricting mating to superior types deemed suited to each other).

Against her father’s strong objections, but with Aunt Laura's approval, Ruth marries Kirk and for a while, wedded bliss surrounds them, crowned off by the birth of their son, Bill. Like all babies, Bill is deemed by one and all to be miraculous—unique and amazing.

However, all good things must end, as they say. Kirk, embarrassed by his inability to support Ruth in the manner in which she is accustomed, heads off to South America to seek his fortune, where he is quickly and thoroughly ruined. However, in the meantime, Ruth and her brother Bailey inherit their father's wealth. Also in Kirk’s absence, enter, of course, Laura Delane Porter, with her scrupulous ideas of hygiene and her horrors of germs, and the baby’s life becomes a nightmare. When Kirk returns, unsuccessful in his endeavors and outraged at the state of affairs at home, the marriage quickly sours.

Can anyone save Ruth and Kirk from themselves and rebuild their happy home?

Their Mutual Child aka The Coming of Bill or The White Hope by P. G. Wodehouse, first appeared in “Munsey's Magazine” in May 1914, under the title "The White Hope.” It was published in the U.S. under the title Their Mutual Child in 1919, and in the U.K. with the title, The Coming of Bill in 1920. (Introduction by Susan Claybrook and Tim Bulkeley with information from the Wikipedia entry.) For further information, including links to online text, reader information, RSS feeds, CD cover or other formats (if available), please go to the LibriVox catalog page for this recording. For more free audio books, or to become a volunteer reader, please visit LibriVox.org.

Uploaded by librivoxbooks on January 24, 2011